An Ode to The Green City Market, or a Cookbook

Chicago likes to eat local. Vegetables, fruits, grains, and meats travel a short distance from local farms to city forks by way of numerous open-air markets throughout Chicagoland. But no single market contributes a wider array of local delights, from fresh fruit smoothies to elk dog bones to Koval spirits, than The Green City Market located in Lincoln Park. And now this market has a friendly companion, a shopping guide of sorts, in The Green City Market Cookbook.

Like any helpful guide, The Green City Market Cookbook begins by telling us a story, the history of the market’s origins. Foodies may recognize the voice behind that story as Rick Bayless tells readers a little bit about The Green City Market’s beginnings when it was a nine-vendor market situated behind The Chicago Theatre. Bayless explains how the market’s seeds have been sown over the years to serve more than sixty vendors and to welcome crowds of 10,000 annually. Bayless provides but one of the voices found here; many other voices of Chicago are contained in these pages, and those voices tell stories, too.

The recipes found in The Green City Market Cookbook are more like little slices of inspiration than step-by-step guides. The voices behind the recipes include a diverse community of customers and chefs, farmers and vendors, and volunteers, all of whom tell their stories of the market. Alderman Michele Smith, for example, is one customer who had never cooked squash blossoms until she saw an orange-tipped bundle for sale at The Green City Market. She decided to experiment with something new. Because of her stroll through the market, a recipe for light and crispy Squash Blossoms Stuffed with Goat Cheese appears in The Green City Market Cookbook.

With a bit of trial and error, building this recipe with a bundle of delicate squash blossoms from a market vendor such as Iron Creek Farms is rewarding. The velvety leaves wrap gently around ovals of chives, Gruyère, goat cheese, and sour cream. Then, while holding one blossom by the green stem, they are dipped into a beer batter and fried to a thinly golden crisp. Smith might have warned readers to keep an eye on these little blossoms, or else all of the creamy market cheese may seep out of the flower pocket and into the oil. Even so, these blossoms make for a savory snack and the goal while cooking them becomes to save a few for serving.

The recipes inside The Green City Market Cookbook are helpfully arranged by season. Whether visiting the market on a crisp April morning or a steamy August afternoon, Chicagoans have in this guide a full menu of items available from vendors and suggestions on how to use them.

Recipes such as the Artful Asparagus Salad, contributed by executive chef Megan Neubeck of Terzo Piano, exemplify the diversity one may find at the market with ingredients like the classically two-toned frisée salad greens and the fringed leaves of mizuna. This simple salad recipe is a friend of the novice chef and utilizes a variety of spring market bounty.

After July 4, deep red tomatoes, fuzzy peaches, and sweet corn arrive with the heat, and the people behind The Green City Market Cookbook have a few suggestions for what to do with them. Tamara Mark of Iron Creek Farms lets readers in on a family recipe for those tomatoes.

Mark’s contribution, Iron Creek Ratatouille, is a dish simple in its purity. There are no added seasonings, no thyme, no garlic, no rosemary—just a bit of basil mixed in with the hearty summer vegetables. This recipe favors a clean cuisine, where the complex flavors of heirloom tomatoes, eggplant, bell pepper, zucchini, and onion take center stage. Mark’s recipe has only three steps. While Emeril fans may be tempted to dash in garlic and thyme—traditional Ratatouille spices—the beauty of this farmer’s recipe is its simplicity. Iron Creek Ratatouille allows for a true taste of The Green City Market’s summer bounty.

Like Alderman Michele Smith’s squash blossoms and chef Megan Neubeck’s diverse salad greens, many of the ingredients found in the recipes in this cookbook, and therefore at the market, may sound intimidating simply because they are different. Indeed, some of the recipes themselves are intimidating.

Often, The Green City Market Cookbook displays photos for shopping at the market. Pick peaches that look like these, it says. Readers see the eye candy of fresh ingredients and then finished products, but never a photograph illuminating the steps in between. The photography is beautiful but not always practical, because the images inside The Green City Market Cookbook lean more toward artistic vision than step-by-step photos designed to help in the kitchen.

While the photography is appetizing, and the stories told by community members are heartwarming, the cookbook’s practical use tends to get lost in sentimental shortcomings. It’s clear that those who were involved with the cookbook care deeply about The Green City Market, but the sentimental vibes are heavy here, and they can, at times, skew the connection between farm and fork. 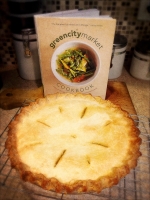 2 responses to “An Ode to The Green City Market, or a Cookbook”