Time, Life, and a Collection of Glimpses

Chicagoan Joyce Goldenstern’s The Story Ends—The Story Never Ends is a collection of glimpses. But her stories, while quick, are dense with detail, depth of character, and enthralling storytelling. Like a book of poetry, what is not there is just as important as what is; Goldenstern is as deliberate as a poet.

Whether from the perspective of a child, a young adult, a housewife, or an old woman, the author’s voice comes through resolutely, easily. Themes of religion, tragedy, acceptance, and morality pop up again and again. A woman comforts

the man who betrayed her when he experiences a misfortune of his own. An aging woman obsesses over a Catholic school fire in Chicago that killed ninety-five children well before she was born. Generations of dutiful women serve in 4-H yet question patriarchal tradition.

But the question of what it means to grow up is also prominent in these stories; at what age, if any, do we stop getting hurt by uncaring partners, by not having a real home or sense of belonging? And how much of our suffering, or ability to fight it, is just a story we tell ourselves? As the narrator in “Circus Acts” says of her life assisting a cruel side show magician, “Surely I must be the main character of this story for I’ve changed the most and many times.” Abandoned as a child, she had nowhere else to go and never left because of “loneliness and fear and habit and perversion.”

“Communion Dress” ends when a young girl figures out that floating through life without making any real connections does not please anyone, including herself. “‘You cannot,’ my mother tells me through her tears, ‘stay alone in your room for the rest of your life and make up stories.’” In “Earth and Sky,” a file clerk who considers herself a theologian concludes that men in her life, whether a dead philosopher or her lover or God, are distracting her, keeping her from becoming the woman she wanted to be. These narrators all share that desire: to uncover their purpose, their personal story.

The vignette-like tales are told with stunning prose, and they create a collection that fits nicely between categories; part prose poetry, part folktale, part short story. Though not the best-executed cover design for this book, the image of a young girl in her communion attire enveloped by flames does speak to the themes that reveal themselves in these stories: We are too easily devoured by our own desires, traditions, and fears.

Though you will not want some of these stories to end, they live on as you think and rethink through their meaning. “Time: the way it does and undoes. What surprises you about getting old? I will tell you: what happened thirty years ago can still cause you to wince or bring tears to your eyes,” says the narrator in “Heart, etc.”

Do we ever truly change? Do we ever become detached from our history? Goldenstern successfully shows us how stories truly never end, and we can only hope that her writing of them won’t, either.

Learn more about the book.

Chasing Love Through the Decades

Laura Quinn’s novel Punk Charming follows the lives of Kate and James as they traverse the globe in hopes of one day meeting again and cementing the love they found on a train in 1986. Quinn’s passion for the fashion, lingo, music, and culture of the 1980s is clear, as Kate and James, as well the secondary characters, embody the lifestyle of the decade. Unlike most romance tales, Punk Charming highlights the growth of the characters and the journey they embark on rather than lustful scenes and corny declarations of love. Though the writing at times seems rushed and the details provided feel a bit overkill, it is clear that Quinn believes love will conquer all. 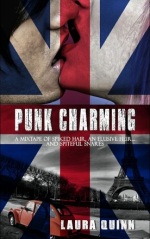 The novel begins with eighteen-year-old Kate embarking on a trip to England where she will complete a study abroad program at Oxford. She is armed with a Walkman full of ’80s music and as many Duran Duran t-shirts that will fit in her suitcase. Upon arriving in Paris, however, she is met with peril and has to use her wits to narrowly avoid catastrophe. Disaster leads to fate, though, when she meets James on a train and it is truly love at first sight.

Once they part, however, the story takes a turn. In a series of almost-meetings between the two, Kate and James seem like puppets caught in a storm, one controlled by the overly attached and deviously scheming character of David. Kate and her sister spend the years going to concerts and parties, all with the underlying motive of meeting James once again.

The plot itself is a compelling concept, but in practice the narration falls short. The atmosphere feels overly described, leaving little left to the imagination of the reader. Though it may be safe to say Quinn employed this technique to help the younger generation envision the ’80s, since they would not have been around to witness it in all its glory. However, the character of David is over-stereotyped, leaving little room for redemption, however much readers might crave it. Indeed, by the end, the constant foil he provides for the protagonists gets to be stale and predictable.

The barrage of ’80s culture is reflected in the “song-of-the-year” chapter titles. These songs give the sections their own unique feel, even though sometimes it feels like the chapters are reaching to adhere to the theme of the song rather than the other way around. They stand as accurate measures of time passing, however, and keep the decades in sharp clarity.

By the time the story reaches the age of the Internet, the connection between the star-crossed lovers is still as complicated as before. Eventually, the world traveling comes to gliding stop in the Chicago area, where it is evident Quinn has spent a considerable amount of time and enjoys as much as her European haunts. If there is one thing the novel excels at, it is the bright bursts of exposition describing the beauties of the countries Kate traverses.

Intriguing as the journey Kate and James took is, the scenes speed by at alarming rates, showing actions and reactions rather than getting into the interiority of the characters themselves. Because of the lack of technology (no smartphones, Wi-Fi, etc.) it would seem the characters would reflect inwardly more often than they did. In the end, Punk Charming is more than a typical romance novel; for lovers of the ’80s and for those that enjoy traveling both in life and through novels, this book gives the reader a little bit of everything.

Learn more about local author Laura Quinn and her books.

A Week in a Life Forever Changed

The Reason for Time
A Novel
by Mary Burns

The summer of 1919 was a dramatic one, even by Chicago standards: a dirigible, the Wingfoot Express, crashed in the Loop; riots broke out after a racial incident at the 29th Street beach; six-year-old Janet Wilkinson went missing; strikes and lockouts broke out across the city; and the Spanish Influenza continued to claim victims here, across the country, and around the world. 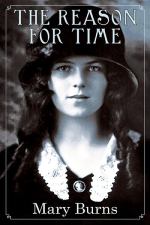 Gary Krist told the tale of these “12 days of disaster” in his highly acclaimed 2011 book, City of Scoundrels. Author Mary Burns tackles this remarkable stretch in her latest novel, The Reason for Time.

Set over the course of a matter of days in the summer of 1919—July 21 to July 30—The Reason for Time is told by one Maeve Curragh, an Irish immigrant living with her sister Margaret in a shabby boarding house for women. The novel opens as Maeve witnesses a blimp fall out of the sky and crash into flames, right into the Illinois Trust and Savings Bank, killing thirteen people. Maeve, walking nearby on Jackson Boulevard among the throngs leaving work for the evening, suffers a cut on her neck from some sort of debris, leaving her with a story of her own on that notable day.

A news junkie, Maeve scours late and morning editions for news of the crash—as she does for the rest of the week, which has no shortage of alarming headlines: the blimp, the riots, the strikes, the Wilkinson story. As it turns out, the week is a momentous one for Maeve as well.

Maeve drives this story, recounting the strange days that would forever change her life. From her goings-on while working at the Chicago Magic Company to her involvement with the charming streetcar conductor Desmond Malloy, Maeve lives her own life—a life at once ordinary and remarkable—while the city reels in tumult.

Burns blends fact and fiction in The Reason for Time, a day-by-day account of these strange days colored by attention-grabbing headlines that heighten the tension. Maeve is drawn to these loud headlines, shouted breathlessly by newsboys hawking their wares. At the same time, she looks inward, contemplating the events that are shaping—and have shaped—her own world. As such, the story is both fevered and thoughtful as the days unfold, a well-paced work that ebbs and flows with just the right amount of tension.

Packed with detail, The Reason for Time is told in Maeve’s Irish dialect, full of contemporary idioms. Maeve’s voice has a distinct rhythm all its own, which can be difficult to decipher at first, but in the end lends the story a rich authenticity. Maeve herself feels real as well, a complex character full of hope and savvy, flawed but not too flawed, doing whatever it takes to survive the immigrant life in a tough, dirty, bustling big city. A spirited, spunky young woman, Maeve is not perfect. But she is likable, and her story is compelling… Compelling, if not a wee bit predictable. One might say predictable with a twist. It’s not too difficult to see where Maeve’s story will end, although Burns somehow manages to make the ending still feel surprising. Even if some readers might be a step ahead of the plot, The Reason for Time is still satisfying.

Full of history, local color, compelling characters, and a complex storyline, The Reason for Time is a quick read, but one that lingers and makes one wonder about the many other stories that could be told of that tumultuous summer of 1919.